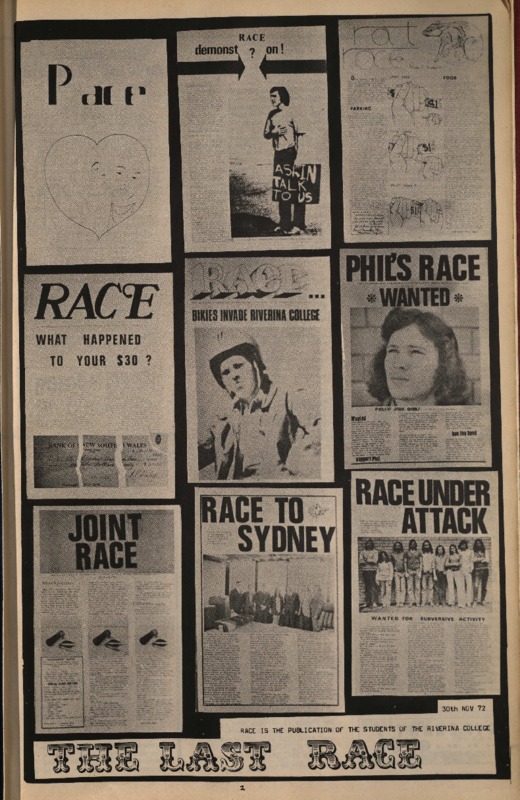 Student publications provide insightful thoughts and information on past students, school administration and of its wider community. Peter Roberts (the first editor of RACE) introduced the publication (Vol. 1, No. 1), as a medium that would welcome the thoughts and feelings of students on any issue... with a minimum of literary or artistic merit (p. 2).

RACE was first published on 29 March 1972 by the Rivcoll Union Student Welfare Council at the Riverina College of Advanced Education (RCAE). The publication operated for 9 years and ended its publication in 1981, with John R. Dohl and Wallace J. Murray as RACE’s last editors.

Contributors to RACE were the individual students from the college, whom all differed in views and wrote on very varied subject areas. The content ranged from everyday college student life, thoughts and opinions on the changes to the local, national and international societal and political environment, general interests, entertainment and issues. Satire was present throughout the publication, as a means of entertainment and to coincide with the apathy theme, evident throughout the publication. RACE often faced controversy and criticism, due to a number of overt contributions in the subject areas of drug use, political opinions, religion, race, nudity and feminism.

This exhibition contains the digitised version of the publication, the originals of which are currently held at the Charles Sturt University Regional Archives (CSURA). The RACE publication, from volumes 1 to 10, are displayed in this exhibition and can be individually viewed.