Dixieland - the Jazz Hall on the Murrumbidgee 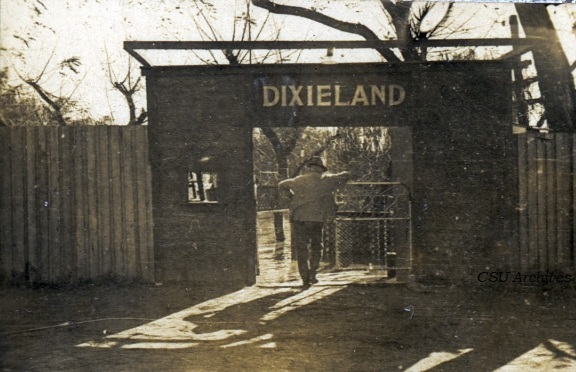 The Dixieland Dance Hall was one of a number of dance venues that the people of Wagga Wagga frequented during the 1920s and 1930s.

It opened in November 1921 and was situated on the banks of the Murrumbidgee at the end of Little Gurwood Street (now, Sturt Street).

The Australian cricket team celebrated the new year at Dixieland in 1922-1923 and one of the team, Arthur Mailey, had such a good time that he wrote about Dixieland a few weeks later in the Sydney paper, The Sun, saying, "The night clubs of Europe and America could not hold a candle to this place... The ripples, the willows, the lights, the hop beer, the stars, the pleasant-faced man at the gate, and the horse outside seem to be sections of a wonderful combination that harmonise and blend, giving birth to an atmosphere that is healthy, sincere, and natural."

In addition to its picturesque location, Dixieland had another unique drawcard: it was the proud owner of a literal floating floor - the dance floor was tied to the river bank and floated on the river!

← "Captured: Portraits of Crime 1870-1930"
John Peter, Prince of Squatters →
Dixieland - the Jazz Hall on the Murrumbidgee